Good for the bottom line 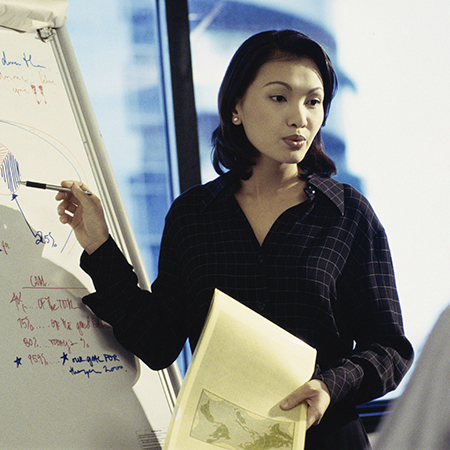 EMBA Programs directly benefit organizations because they offer the knowledge and tools that managers need to excel on the job. The EMBA experience supports students as they:

As a tool to further develop organizational talent, the EMBA degree grooms talent to assume greater responsibility in less time, assists in the retention of high-potential leaders, and helps increase motivation and confidence. EMBA students often can tackle more complex assignments because of their EMBA education, which benefits the organization, and EMBA students apply their knowledge to the bottom-line benefit of the organization, both during and after the program. Many EMBA Programs also make it easy for students to increase their contributions at work during the program by requiring projects to solve real-life business issues.

In addition, because students in the EMBA also are working full time, they are able to bring their concerns into the classroom – and in front of a group of experienced peers and faculty for consideration – and return to work with new approaches. They often develop ties with peers and faculty and can turn to them for insights throughout their career.

The Executive MBA strengthens the knowledge and abilities of its students, which translates into gains for them and their companies that include:

The result is an enviable one: The project’s expected return after its first year of implementation was approximately $3 million. And the company continues to reap the benefits of the foundation that Williams laid for lean enterprise.

The value of his degree to Williams and Peerless Pumps merged into a win-win for both.

“It definitely provides the stage to set yourself up for success,” says Williams. “I think it put me in a position for a promotion without a doubt."

With strong evidence to support the return on investment for Peerless Pump, the company has sponsored other students. In fact, Mike Cates, Williams’ boss, also completed an EMBA Program.

“In many ways, the impact of the degree is immeasurable,” says Cates. “You can’t really measure the results of effective leadership. Leroy has been able to affect those he works with in a positive way. Everybody sees it, and it makes so much more possible.”

Interested in the Executive MBA?
Search for EMBA Programs worldwide.